In Memory of Ross Maxwell

March 07, 2013
It is with great grief that I write my post this evening.  Ross Maxwell, the son of some dear friends and one of my former students, passed away this morning short of becoming 22 years old.  Ross, who called me his "school dad," was a gifted, selfless, and loving kid since he was a 2nd Grader at St. James Episcopal School, where I was Head of School.  His mother was my 5th Grade Teacher and later Assistant Principal.  Therefore, Ross, as well as his younger sister and brother, have been a part of my 2 daughters lives ever since.  They laughed, cried, and even prayed together during our daily chapel services.  Since he was older, they all looked up to him and respected him tremendously.  Even after he left to Texas A&M, he influenced my oldest daughter to follow suit.  He truly became like the son I never had, as well as a brother to my daughters.  We were all blessed by having him in our lives.  I know Ross is now in peace after his one year battle with cancer and rejoicing in the arms of our Lord, Creator and Savior.

Jennifer McLean said…
I'm terribly sorry for your loss Arnoldo. It's a comfort that you can see your way past the pain to see that he is in a better place with god and his other people. It sure doesn't help us down here who miss our loved ones though. Stay well my friend. sending you a warm hug.
March 8, 2013 at 1:01 AM

Barb Cady said…
Dear Arnoldo, I am so sorry, what a loss. And what an amazing young man to have touched the lives of so many in so short a life. My thoughts and prayers go to your family and his family. With loving hugs to you all, barb
March 8, 2013 at 2:42 AM

Winnie said…
Arnoldo: So sorry to read about your friends passing. He sounds like a remarkable young man. But his memory with live on in the hearts of all who were lucky enough to know him. Take care.
March 8, 2013 at 1:53 PM

Karen Letchworth said…
What a wonderful tribute you've made. I pray that god will comfort you as well as all his family and friends during this difficult time. Thanks for sharing this with us, Arnoldo.
Blessings,
Karen
Word Art Wednesday
March 8, 2013 at 1:54 PM

Tracey FK said…
You have my heartfelt thoughts and love at this time... we have gone through the same experience as a family in recent months and it is just bloody awful, but I hope that your faith brings you great comfort and that your family are drawing together and giving each other strength...xx
March 8, 2013 at 3:42 PM

Neesie said…
Oh Arnoldo I send you, your family and Ross' family my heartfelt condolences. It sounds like he was quite a guy.
I trust your faith will help you all at this sad time...blessings xoxo

Joy Murray said…
My deepest sympathy. The Lord giveth and the Lord taketh away. I'm so glad you were blessed with having such a faithful young man and true friend in your life. It's rare for us to find such connections in this world. The depth of grief is matched by the depth of love felt when one of our true friends and family passes on. Our thoughts are with you.
March 10, 2013 at 11:41 AM

VonnyK said…
Dear Arnoldo, my heart goes out to you and both families. Nothing can be worse than losing a child. May your faith get you, your family and the Maxwell family through this terrible time.
Von.
March 10, 2013 at 6:49 PM

Gemiel said…
Arnoldo, what a wonderful tribute to your "son". I am lifting prayers of comfort for you and Ross' friends and family. May God wrap his loving arms around you all and grant you His peace, the peace that surpasses all understanding, during this difficult time. Blessings!
March 12, 2013 at 10:41 PM

Candy C said…
Arnoldo...This post made me cry. It's hard to understand why those so young and so full of life are taken. But, I know God is the Master of everything and someday, we will understand. Your tribute to your former student and friend, Ross was so sweet. Thank you for telling his story. I will keep his family in my prayers. I also wanted to thank you for stopping by my blog and leaving such a nice comment. <3 Candy
March 13, 2013 at 10:13 AM

Victoria said…
Hugs of comfort, love, healing and deep peace to you and all who loved your beautiful friend!
Victoria
March 17, 2013 at 4:41 PM 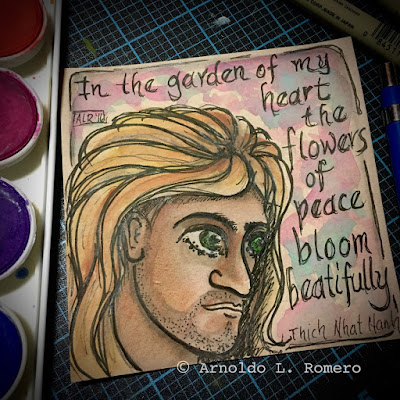