Our Trip To Maui, Hawaii

June 29, 2018
Last summer my wife and I took our first trip by ourselves since before our eldest daughter was born.  With both our girls grown, we decided to take one last summer.  However, I was swamped at school until the last minute, so I ended up planning a trip to Maui, Hawaii, two days before our departure date.  That was very unlike me, since I'm very OCD.  However, I was blessed to find a peaceful Bed & Breakfast in an old plantation in Haiku.


Located in the Central Pacific Ocean, Maui is the second largest Hawaiian island at 727.2 square miles (1,883 Km2).  In my humble opinion, Maui is a glimpse of Heaven, with its diverse ecosystems, glorious landscapes, and rich culture.  Every morning, we'd start off the day with a healthy breakfast of locally grown fruits, fresh breads, and Kona coffee.  Friendly conversations around the table with people from all over the world were a treat as well.  Then, we'd pack our lunch, get in our compact rental car, and get on Hana Highway with our map and guide book in hand.  Everyday was an adventure, as we explored every breathtaking area of the island!


The island is named after Demi-God Maui.  According to legend, the days were short in ancient times, so crops took a long time to grow.  Maui's mother complained, so he decided to correct the situation.  He climbed Mount Haleakala, trapped the sun with his net, and convinced him to slow down its course.  This is why sugar canes can be cultivated in the island.  Some even say this is why the island's shape resembles Maui's head, neck and body (See Map).  By the way, Haleakala is the highest point, and is found at Haleakala National Park, which is definitely worth the drive up.  Just don't forget to take a light jacket with you and expect strong cold winds.


Although no longer its main source of income, Maui was once a thriving sugar cane mecca.  Two principal entrepreneurs were Samuel T. Alexander and Henry P. Baldwin.  In 1869, they bought 12 acres of land and began growing canes.  They were  responsible for the cultural richness in the island, since they organized a systematic immigration of laborers from China, the S. Sea Islands, Japan, Portugal, Puerto Rico, the Philippines, Spain, and Russia, as well as some German, Scandinavian, and African Americans.  In addition, they were involved in ocean transportation, property management, and investments, as well as in politics.


The highlights were many, such as the inexplicable excitement when we visited Waianapanapa's black beach or when we found ourselves surrounded by a flotilla of sea turtles at Keawakapu Beach.  The food and beverages at the various restaurants we visited were delectable too, with their traditional poke, varied Mahi dishes, pineapple wine, Hawaiian beer, and much more.  Of course, we did a little shopping too, and I had to purchase an authentic Hawaiian shirt in charming Paia.  I could keep going on and on about our exciting 5 day trip, but I don't want to bore you.  As you can see above, I was so inspired by our trip, that it was reflected in artwork too.  Aloha!
Art Journal Etegami Hawaii Maui Photography Traveling Watercolors

sirkkis said…
Pooh, what a paradise you have visited! Thank you Arnoldo for sharing the wonderful photos.
Your watercolor paintings are beautiful.
Happy PPF 🌺🌱

Valerie-Jael said…
What a wonderful trip you had, it's really a paradise on earth
Beautiful art as always.Happy PPF, Valerie
June 29, 2018 at 11:22 AM

Linda Kunsman said…
The photos alone are so gorgeous I can only imagine seeing it all in person! Good for you to have planned such a spontaneous trip with your wife Loving all your inspired art- especially the turtle:) Please feel free to share more- I for one would love it! Happy PPF!
June 29, 2018 at 12:05 PM

Gillena Cox said…
Thanks for sharing your heavenly trip. Luv this week's art. Happy you dropped by my blog today

Susan said…
We have spent many happy times on Maui and your photos and sketches are wonderful reminders of that paradise. Thanks for sharing and Happy PPF
June 29, 2018 at 2:38 PM

denthe said…
How gorgeous it is there. You look so happy in the pictures. And I love the artwork that was inspired by it, especially the last card. Happy PPF!
June 29, 2018 at 5:06 PM

A Colorful World said…
That B&B looks like the perfect choice of a place to stay! Love your wonderful photos and the artwork! What an amazing trip...sounds like it was well-deserved and long overdue!
June 29, 2018 at 10:22 PM

froebelsternchen said…
Oh wow - an amazing trip - thank you for the fab photos Arnoldo and for the informations about Maui. Your sketches and cards are so beautiful and you made me happy to link to Moo Mania & More!
Thank you very much!
Wishing you a happy weekend !
Blessings
Susi
June 30, 2018 at 1:31 AM

John R said…
Your artwork is beautiful. I especially like your turtle. Love your photographs, too. It's been a while since I traveled, due to illness, so nice to see something different. Looks and sounds like you had a great time. Brilliant post.
June 30, 2018 at 7:50 AM

Victoria said…
So lovely to visit your creative world again, wonderful photos of you both, and such beautiful sceneries..sounds like you both a very special and fun time! Gorgeous art, love the sea turtles, fabulous as always my friend! Love the quote too!
happy PPF
Victoria #33
June 30, 2018 at 1:14 PM

DVArtist said…
Great post. I have been to Maui many times and to Hanna as well. The photos are fantastic especially the one of you and Lisa. I love the turtle too. Have a wonderful weekend.
June 30, 2018 at 3:19 PM

NatureFootstep said…
I have been to Moui once long ago. I liked it. And I like the artwork too. Especially the turtle. :)

Wolfgang Nießen said…
Wonderful pictures. Thank you for showing.
I wish you a very good time.

Tracy Freeman said…
What a gorgeous place and what beautiful art too. The turtle is amazing !
Thank you for sharing with us at Simon Says Stamp Wednesday Challenge blog.
I hope you have a great day :)
July 2, 2018 at 5:53 AM

Marit said…
Aloha to you Arnoldo... thanks for sharing not only the photos but a little history of Maui too, I loved to read it all. The waterfall is just stunning but so is all the scenery... glad the two of you had a wonderful time exploring. I really love your stamped turtle! Big hug from Holland, Marit (woyww #22)
July 4, 2018 at 8:17 AM

Sharon Madson said…
Gorgeous Hawaiian inspired art! What a wonderful time you and your wife could have! So glad you got to go. Sometimes, last minute works out for the best. :) Happy WOYWW. #36
July 4, 2018 at 11:05 AM

Bleubeard and Elizabeth said…
You take the best photos. I love them. My favorite of course, is the old Sugar Mill. I have a thing for anything industrial and rusty. Happy WOYWW from #1.
July 4, 2018 at 11:31 AM

glitterandglue said…
Hi Arnoldo. What a lovely description of your trip. A beautiful place indeed with so much variety. Glad you so enjoyed it.
Thanks for already visiting and your beautiful comment about the death of my friend Marian. God is gaining the glory by her life and death.
Take care. God bless.
Margaret #4
July 4, 2018 at 11:37 AM

Win Dinn, Artist said…
It looks a fabulous trip, and so well deserved given the length of the time since the last one, along with your truly busy schedule. Thanks for all the wonderful photos!
July 5, 2018 at 12:05 PM

Dorlene Durham said…
What beautiful photos! We went to Maui five years ago and I have to agree with you regarding it’s beauty. Love your art pieces and how you were inspired by your vacation. Have a great week. Dorlene #40
July 5, 2018 at 5:09 PM

Tracey@Hotchpotchcreations said…
Oh my Arnoldo what a fabulous post, full of happy memories and colour in abundance. I'm pleased to hear you purchased an Hawaiian shirt whilst there a true original. Your turtle painting is most splendid and I love that card, very fitting with all that marvellous photography!!
Thank you so much for sharing WOYWW, sorry i'm late to visit..
Enjoy the weekend Tracey #5
July 7, 2018 at 2:02 AM

Zsuzsa Karoly-Smith said…
What an amazing place Arnoldo! I've really enjoyed learning about Maui. I always plan our trips in the last minute - so nothing wrong that - and sometimes you can pick up last minute deals that way - of course, there's also the chance that you can't find anywhere to stay, but that hasn't happened yet! Lovely art as well, as usual! Have a lovely week! zsuzsa #26
July 7, 2018 at 10:22 AM

Win Dinn, Artist said…
What a fabulous holiday you've had - I especially love it that you're creating wherever you go. And congrats on doing that last-minute trip!!!
July 19, 2018 at 11:37 AM 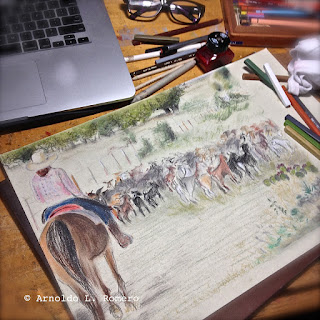 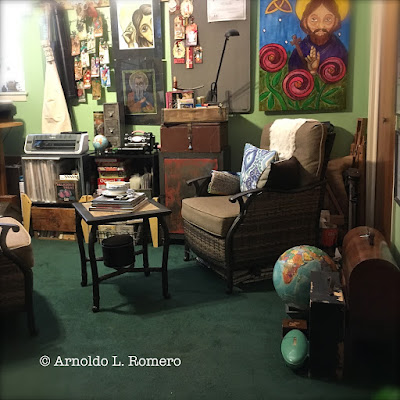